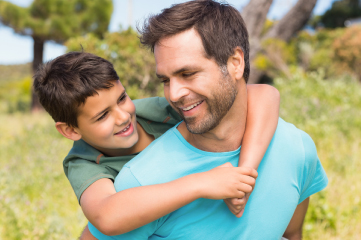 September 14, 2017 | By NuBest
Though my son was born from an American father and a Filipino mother, he did not inherit my outstanding height. He was as short as his mother. By trying many different ways, finally, we also "improved" our son's height successfully.

In 2004, returning to the USA after taking part in the war in Iraq, I travelled to the Philippines to explore the beauty of this country and relieve my stress. In the Philippines, I met a local girl and immediately was attracted by her. Although we knew each other for a short time, we decided to get married because we fell in love with each other. When my wife was pregnant, I could not take care of her because I had to return to the USA to complete the procedure for taking her to the USA.

When my son was born, I was extremely happy to see him through Facetime. He was a very cute boy. I immediately flied to the Philippines to visit my son. Looking at my wife alone with our son, I promised that we would reunite soon in the USA.

Finally, after many complicated procedures, my wife, my son and I reunited in the USA when my son was over six months old. However, my son kept crying for almost a week before he could smile and get closer to me because he felt unfamiliar to the new living environment.

My wife and I had to combine breast milk with many different kinds of formula milk due to the shortage of breast milk. Fortunately, he still grew up as fast as other children. He soon entered the secondary school and got good grades.

My mother told me that my son looked just like me, from the nose to the chin and the eyes. However, regretfully, he was much shorter than his friends because he did not inherit my "outstanding" height. While my wife was very upset about our son's height, I did not pay much attention to this because I thought that my son still had a lot of times to get taller.

Until one day, coming home from work, I had to talk to him because he looked very sad at that time. He told me that he had not overcome the physical challenge at school because of not throwing 5 out of 10 balls into the hoop. Although he had tried his best, this result was still much worse than that of his friends.

Since I was so busy, I rarely talked to my son. I did not know he had to be in such situation. I was really worried because I also did not know whether his appearance made his friends isolate and tease him or not.

In that evening, my wife and I seriously talked about this and we came to an agreement that we would find ways to improve our son's height. My wife was an Asian so she considered height as an important factor. In her country, a short stature brought about not only the inferiority complex but also the barriers in life. I have never experienced this feeling before. However, after listening to her, I also sympathized with her previous concerns.

While shopping on Amazon.com, I accidentally discovered NuBest Tall - a height growth supplement. After looking through the ingredients and the usages, I found that this was the product that my son needed. I was quite fond of the products that had natural ingredients like that because they were safe and had no side effects. As the result, I decided to buy NuBest Tall for my son.

During the first period using NuBest Tall, though I did not notice any change in his height, I noticed that his mental health as well as his physical health were improved positively. I also encouraged him to play basketball and other sports regularly because basketball was very beneficial to the musculoskeletal system.

My son is also in the leading group to any physical challenge at his class. I am very excited and proud. In addition to the support of NuBest Tall, I think that physical activities are also considered as one of the key factors contributing to my son's current height (Mr. David James - 36 years old - Washington, USA).

(*) We assure that this article is based on the real-life results from our customers. We do not have any intention of creating any misleading information but respect the way our customers expressed their opinions.

Master these 3 keys and your children will grow taller optimally
Probably you once got lost in a multitude of advice, myths and tips regarding height increase for children, and you might wonder which one would really work.

When will we start shrinking?
From the early age to adulthood, each person’s height will grow uninterruptedly. However, once reaching a certain period, we can begin “shrinking”.
MORE

Growth hormone and its impacts on children's height
Growth hormone is one of the factors that greatly affect our height. However, what is this hormone? How to get it naturally produced more? This article will explain more.

What should milk haters do to get enough calcium?
Milk is considered a supplemental source of nutrients, especially calcium, to help us grow taller. However, not everyone is "interested" in milk. Some people even are allergic to milk. If you are suffering from this condition, you can use the following substitute foods to get enough calcium and to ensure that the height growth occurs favorably.

My skin becomes beautiful thanks to my fiancé's gift
My fatigue and tiredness came to an end after I had used NuBest White - a natural skin whitening supplement (Lalita Paisarn - 31 years old, Bangkok, Thailand).